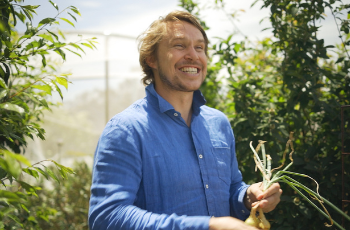 Born and raised in Canberra, Australia, Toohey was a visual student, excelling in sports, drawing, photography and woodwork. After graduating in 2004 he worked in a number of cocktail bars and completed a TAFE course in Hospitality Management, graduating with an Advanced Diploma in 2006 before completing a Bachelor’s degree in Tourism Management from the University of Canberra three years later.

In 2012 Toohey bought a one-way ticket to the UK where he lived for five years in both London and Edinburgh. It was while working in London as a bar manager that he won the titles of Best Cocktail Menu and Best High-Volume Cocktail Bar at the ‘Tales of the Cocktail Awards’ held in New Orleans. In a city where 10,000 bartenders descended for the annual conference, taking home the two coveted prizes in the global competition was recognition worth celebrating. But after four years of late-nights, hard-partying and long hours started taking their toll, Toohey decided it was time to move and made his way to the Scottish capital where he embraced his long-held passion for food, enrolling for a Masters in Gastronomy from Queen Margaret University, learning about food sovereignty and sustainability, alongside indigenous farming and medicinal spices.

Returning home in 2017, he settled in Melbourne with girlfriend Georgia, and planned his next move in the world of food. That came with his participation in season 11 of MasterChef Australia in which he wowed fans with his vegan creations and use of seasonal vegetables. Placing third, Toohey went on to appear in season 12 – also known as MasterChef Australia: Back to Win – which was shown on Australian TV earlier this year and has yet to be seen in SA. This series featured former high-achieving contestants from the past eleven series returning for another chance at the title of MasterChef and the R3 million prize.

Although Toohey didn’t win he has been incredibly busy and we managed to catch up with him between filming a new series and working on his first cook book to ask a few questions ahead of his appearance on The Festive Vegan & Plant Powered Show.

When did you start cooking?
I knew the basics from watching my mum cook and helping her sometimes make a few of her classics, like red Thai curry, amazing pasta and Indian curries. She was an amazing cook. I also learned to cooked lots of my dad’s dishes which was definitely the more rustic Australian home style like stews and roasts.

What made you move onto plant-based dishes?
I think the reason I moved towards a plant-based diet was because my partner Georgia is veggie. We just started eating vegetarian meals and then vegan ones. It excited me because it was a challenge to create beautiful food that isn’t the same Instagram colourful bowl of raw veg on noodles or rice. I wanted to explore flavour. It’s hard sometimes as vegetables are mostly considered a side dish. I wanted to explore how I could make veggies the centrepiece of the table.

Tell us about cooking on MasterChef, what is it like to be cooking mostly plant-based meals and do you think you’re making more people aware of how delicious veggies can taste?
I absolutely loved it when I got the chance to cook just vegetables. I received a lot of messages saying thank you for finally bringing an appreciation for plants to MC, that has been such a meat-heavy show since day dot. I also receive messages from people telling me that they aren’t vegetarian or vegan, yet they really appreciate the fact I cook vegetables as they are interested and want to move in that direction. It’s a fantastic feeling. But the best is that mums and dads have stopped me in the street and told me their kids eat veggies now as I’ve made them ‘cool’… Now, ‘cool’ isn’t something I would ever consider myself, but I’ll take it.

What have you been up to since competing in MasterChef Australia 11 and 12?
I haven’t stopped. I have a new show coming out which is hush hush at the moment but keep an eye out for it. My business partners and I have also launched the Sustainable Earth Network which focuses on producers aiming to change the way we look at food; look at historical farming techniques but bringing it to the modern time to help us examine what we eat and how we eat in a different way. For example, seaweed, foraging, hemp, hyper local and indigenous topics. I have been writing my first cookbook which is all about the world of vegetables and I co-founded a Hard Seltzer company that only uses local and native ingredients – like native ginger, lime and local spirit. I am also the ambassador for Dilmah tea along with their amazing foundation. They are the most ethical tea company in the world and what they are doing for their country and the world is outstanding. And as if that wasn’t enough to keep me busy, I am working on a national campaign with The Sauce Bulk Foods, looking to get Australia to make a swap from animals and dairy to plants, changing certain sugars, looking at organics and making ingredients delicious.

MasterChef Australia is such a huge show – extremely popular in South Africa. What do you think makes it such a hit?
I think it’s because people care about each other. There are so many shows these days that are so focused on back-stabbing, bitchiness and people being unkind. MasterChef shows us that there is compassion and bringing it all together with food is a double winner. It teaches us at the same time engages us and for me it is an hour’s relief from the stresses of all the bad news out there.

There is a growing trend towards a plant-based diet but many are stumped as to how to get started and create a sustainable and tasty life around vegetables. What advice can you give?
It is the unknown that makes it difficult to swap over. We have spent out lives being fed the classic meat and three veg. No wonder when people make the change to a plant-based diet, they are stuck working out how to complete a meal. Three veg just doesn’t cut the mustard (so they say). Not only that, but there is only so many bowls of brown rice with red cabbage, a sliced up avo, some tofu, some soy and sesame in a bowl you can eat. Not only that but eating pasta or bread every night to help fill you up doesn’t help either. So my advice is look at one ingredient, whether it’s an eggplant, broccoli or cauliflower and find a recipe that makes that awesome. Then add some grains on the side like cracked Bulghar wheat or lentils or couscous. Or when the recipe talks about mince, use mushrooms – they are a fantastic substitute. But finally, what helps me, is I cook Indian a lot. They are the royalty of plant-based eating and there is no denying it – they know how to pack in a lot of flavour.

How has Covid impacted you – both professionally and personally?
It’s just frustrating. If I was doing what I used to do pre-MasterChef, I would be unemployed right now. So I thank my lucky starts that that isn’t the case. In saying that, everything would be streets ahead when it comes to work deadlines and goals, so I’m stuck at home when all I want to do is be out there eating, growing, learning and cooking. But in saying that I have been forced to do all the things I can’t stand doing, like paperwork and proposals and pitches and spreadsheets!

What dishes will be on your Christmas menu this year, where will you be celebrating and who with?
I’m about to become an uncle and my brother and his wife just bought a place in the central highlands so we will all be up there. It will be a beautiful table of fresh, summery dishes. Lots of things to snack on and little bits of everything. I love choice and mix matching flavours.

A few quick-fire questions:
What would be your last meal?
My last meal would be me sitting on a blanket surrounded by Indian dishes from all regions and a huge bowl of saffron rice in the middle. Truly heavenly.

Best kitchen utensil?
A tablespoon with a flat and fat handle. It does everything.

We asked Toohey to share a simple, yet delicious dish with us and he gave us his classic Ratatouille recipe.