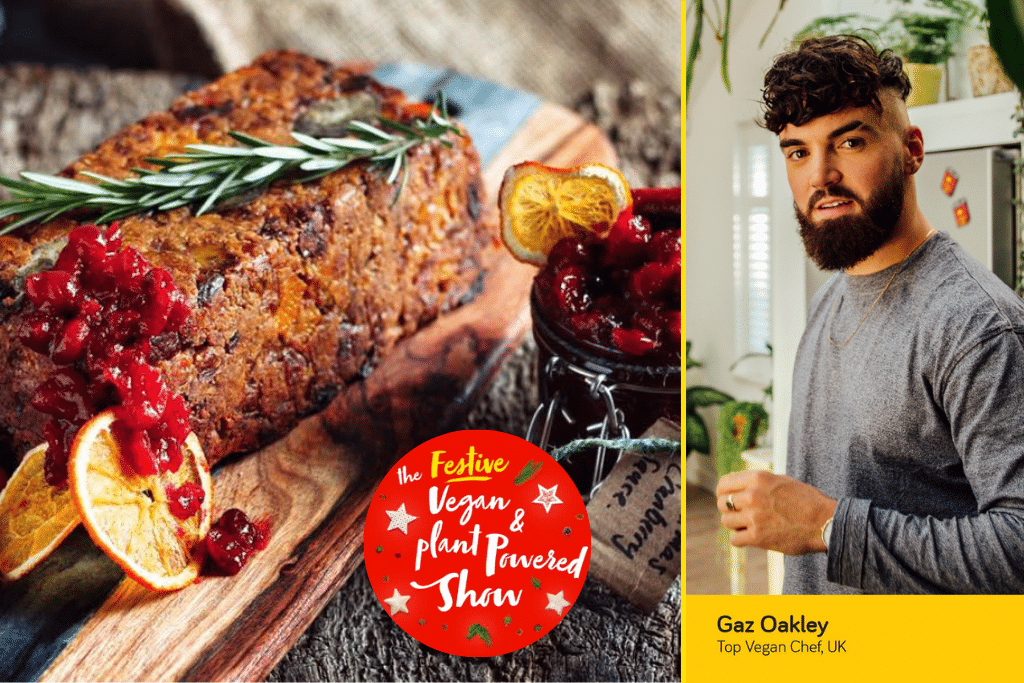 The rise and rise of plant-based chef Gaz Oakley

One of the world’s most celebrated vegan chefs – and a man who has more than a million subscribers on his YouTube channel – is one of the star attractions at the upcoming Festive Vegan & Plant Powered Show (FVPPS).

Gaz Oakley, a 28 year-old UK based chef, author and social media sensation, will be one of the line-up of chefs who will be appearing on South Africa’s first online food show on Saturday, November 28.

This not-to-be-missed one-day visual experience will allow visitors to meet some big name local and international chefs and discover products and services in an entertaining, engaging and informative way.

Oakley, who is also known as the Avant-Garde Vegan, will be hosting a special cooking demonstration which, he says, “will provide the South African audience with a beautiful recipe, that doesn’t take long to cook but still really impresses.”

Visitors to the online event will also be able to meet and greet Oakley – albeit virtually – and ask him a question or two.

So who is Gaz Oakley?

After learning to cook at a very young age with his dad, cooking and sports became Oakley’s early passions. Wanting to learn even more about the former, Oakley got his first part time chef’s job at the tender age of 15, working at a local hotel restaurant. A year later, after completing his GCSEs, he left school to work full time at the restaurant.

After a few years he decided it was time for a new challenge and plucked up the courage to knock on the door of Le Gallois, a renowned restaurant in Cardiff, Wales. Oakley offered to work for free to show off his skills and to his amazement the head chef agreed. He worked the weekend for no pay and a week later was offered a full-time position.

“Working at Le Gallois was intense but the food we served was unbelievable. I learnt so much and was given the freedom to create my own dishes for the menu.”

After working long hours in the kitchen for a number of years Oakley decided to take a sabbatical. Now that he had some spare time again, he got back into exercising, started weight training and adopted a body builder’s diet but gained a lot of weight and did not feel healthy at all.

“I noticed more and more information about veganism popping up on my social media feeds and then one day my favourite musician Jme (aka Jamie Adenuga) was on the radio talking about what made him go vegan, and he mentioned a YouTube video by a guy called Gary Yourofsky which made him make the change overnight.

“I watched the video and was blown away. From that day on I knew I would be vegan for the rest of my life”

Wondering what he was going to do to keep his new eating plan plant-based, interesting and healthy, Oakley started experimenting in his kitchen.

“I remember eating my first vegan meal and it was like a weight had been lifted off my shoulders. It tasted so fresh, vibrant and flavoursome. After weeks of experimenting my passion for cooking was back and I started to create the most incredible vegan food.

“One day I came up with an idea to turn people on to the idea of veganism. I invited a group of friends over and made them the most amazing vegan burgers ever. They were gobsmacked and didn’t believe they really were 100% vegan burgers. From that moment on, I knew that I had to use my cooking skills as my way of promoting veganism.”

In February 2016, after many months of cooking for friends, recipe testing and experimenting, Oakley started his Instagram page @avantgardevegan,with the hope of spreading his activism through food to a wider audience. And before he knew it, he had thousands of followers from around the world, a number that now sits at over half a million and growing daily.

In December 2016 Oakley launched Avant-Garde Vegan YouTube.  “I knew just sharing food pictures and written recipes wasn’t enough; I had to physically show people how to make it. I was creating all these incredible dishes using ingredients like seitan which I learnt just through trial and error.”

Oakley has now completed over 11 seasons of recipe videos, has over one million subscribers who are based all around the world and his YouTube videos have a combined total of nearly 40 million views.

The next obvious move was into publishing, and in January 2018 Oakley released his debut cookbook titled #Vegan100, which is sold worldwide and has been translated into five languages.

“#Vegan100 is filled with all the recipes I created between the first day I went vegan up to the day I handed the book text in. I wanted to make sure there was something in there for everyone and packed with dishes that will also appeal to non-vegans.

In December 2018, Oakley released his second book, Vegan Christmas which, like his debut book, went on to become a bestseller. A third book, titled Plants Only Kitchen was released in April this year and is filled with simple protein packed recipes that have proved to be a godsend to vegans and vegetarians during lockdown the world over.

All three books are available in South Africa at leading bookstores and online.

As if his schedule is not full enough, Oakley also recently became the executive chef at a London vegan burger restaurant, The Vurger Co., designing new burgers and dishes for their menu.

“I have dreams of opening my own restaurant and one day I will, but in the meantime giving people the chance to taste my food at restaurants before opening the doors to my own place is pretty awesome.”

The online Festive Vegan & Plant Powered Show, which takes place on Saturday, November 28, from 11am to 5pm will include a host of international and local chefs including Gaz Oakley, Chef Cola, Chef Jay Mac from the Kind Kitchen, Chef Chris Erasmus of Foliage, a yet to be revealed finalist from MasterChef Australia 2019 and more still to be confirmed. Also featured in the show will be cooking demos, expert talks and The Great Big Festive Vegan Banquet.

For delicious plant-based recipes, subscribe to our You Tube Channel HERE!